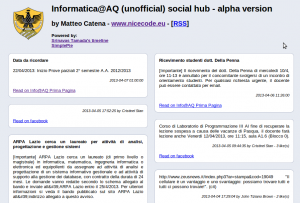 During December 2012, the student Daniele Orlando organized an hackathon at my university. The contest topic was about the social networking divide. For various reasons, I couldn’t attend it.
My idea would have been about creating an hub for my study course. We currently have (at least) three information channels: the offical site, the facebook group, and the super-cool google group. It can be pretty chaotic to follow, or update, all of these.
My idea for the contest was to create a single point of access to these channels, leveraging technologies like RSS and facebook api. I’ve lately implemented this idea. It’s been quite easy, it took me probably less than a day to develop the proof-of-concept you’ll find attached to this post.You can also find a running demo .

My social hub uses SimplePie to access RSS contents (which is the case of the website and of the google group) and facebook social graph api to access facebook (open) groups. Also, with my social hub you can republish contents via RSS.
Since I suck at web designs, I’ve just used a Srinivas Tamada’s template.

To run my code on your machine you’ll just need a LAMP installation and a facebook application key and secret. A facebook app is needed only if you want to read from a facebook open group. Make sure to ask for user_groups privilege while creating the facebook app.

Be aware!! This is just a proof of concept release!!